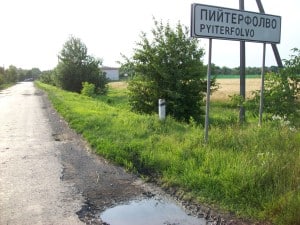 How does a person define home?  This is a fundamental question with an answer that can be easy for some.  But for others, the answer is elusive, sought after and never found even after a life time of wandering and searching.  Where are you from?  This is an introduction question and probably one of the most commonly asked question around the world every day.  Is the answer to this question and the definition of home one in the same?  “Where are you from?”  is one of the most common questions we are asked.  I normally answer the question with Northern Michigan, not my birth place but where I spent my formidable years and the majority of my youth, and where my parents still live.  Stacey without hesitation answers the same question with Eastern North Carolina despite the fact that she was born and raised until age of 13 in British Columbia, Canada.  Hans, will likely have a much harder time articulating an easy answer to this question; it remains to be seen how he will respond to this simple yet fascinating question.

Where is your home?  This is a substantially more difficult question to answer and takes us back to the underlining question: How does a person define home?  Is home where you are currently living?  Is home where you are “from”?  Is home where you spend most of your time?  Is home reserved for describing your native homeland?  Is home the culture you were raised in?   Not even passports and citizenship can completely help define this, as both Stacey and Hans and millions of other around the world are dual citizens.  When asked where our home is we typically respond that we have three homes.  One in Peterfalva, Ukraine, the village in western Ukraine where we spend the majority of our time, and a place where we feel very at home.  Two, in eastern North Carolina where we spend the majority of our time while in the U.S. working and living, and where our home church is as well as many friends and family.  Three, in Michigan, the land of my birth and a place we still spend time with family and friends.

For the majority of people who we live and work with in Transcarpathia, Ukraine, this is a question for them on a much larger, serious, and darker historical scale.  Transcarpathia is a very rural cosmopolitan place.  Cosmopolitan seems to be a word mostly used to describe big cities, places like New York or London where hundreds if not thousands of different nationalities live.  But it is a word that I think perfectly describes Transcarpathia, which has been historically and/or currently populated by Hungarians, Roma, Ukrainians, Rusyns, Slovaks, Russians, Jews, Czechs, Romanians, Germans, Poles among others.  Transcarpathia, historically has been Hungarian, yet in the past 100 years it has belonged to the Austrian-Hungarian Habsburg empire, Czechoslovakia, Hungary, The Soviet Union, and Ukraine.  Many nationalities ruled by many different governments has left Transcarpathia with a tragic history, and yet such a fascinatingly rich heritage and interesting history infused by so many people groups who have called these lands home.  I find that few places in Europe, if any, can match the level of intrigue that Transcarpathia possesses.

The definition of home remains a serious question for so many here in Transcarpathia.  When our Hungarian friends travel abroad they are often met with confused looks from people they encounter when they try to explain why they are “from” Ukraine but they are Hungarian.  Ever changing borders over the past century have been redrawn time and time again by which ever particular world power who for at the moment possessed the upper hand.  These fluid borders over the past century have resulted in villages of ethnic Hungarians living next to villages of Ukrainians and Rusyns living out century old traditions of their heritage.

Recent fighting and conflict in Eastern Ukraine and economic turmoil throughout Ukraine in the last years has ceased being current affairs in the mass Western media, but despite the complete failure of Western main stream media to report accurately on global affairs these events have not yet to become history.  Conflict in the east of Ukraine and economic hardships remain very realistic and raw current events.

Many people here in Transcarpathia, including many Hungarians have been leaving while more and more Ukrainians (some from eastern Ukraine) are moving in and replacing them. Even today with a relatively long stretch of continual nationhood (Ukraine has now existed for 25 years, marking the second longest tenure of any government ruling Transcarpathia in the past century) and unchanging borders, the ethnic situation of Transcarpathia continues to remain fluid and changing.  Hungarians of Transcarpathia (as well as Ukrainians) including many people we know here in Transcarpathia, Ukraine have joined a mass exodus of people who have left in the hopes of finding work and financial security in other parts of Europe. Most commonly Hungary, but they have also become factory workers in the Czech Republic, farm hands in Holland, hotel maids in England, construction workers in Germany and even some who have reached as distant lands as Canada.

Many people in Transcarpathia and the expanse of Ukraine have joined the masses of Syrians fleeing Middle East wars, Mexicans immigrating to the U.S., and many other people around the world who are part of a current global mass of shifting populations.  They have joined those who preceded them who passed through Elis Island, New York, and those who have immigrated to Canada in the past century and a half, or many others who have traded one culture for another fleeing wars and persecution.  They now join those who struggle with the definition of the word home. Despite the shifting populations around the world we are left with the call of the Great Commission to make disciples of all nations (Matthew 28:16-20), and to love the Lord our God … and our neighbor as ourselves (Luke 10:27).  This applies to us no matter where we live and no matter who are neighbor is.

There is a familiar phrase: Home is where the heart is.  This phrase is maybe overused, over simplified and cliché.  But many things are cliché for a reason, because there is an element of truth to it.  With a loving family, friends, and a church community home can be by one definition, where the heart is. Is home a place where you lay your head at night, or is home where your heart is, or is home a cultural identity, or is home a homeland of sort? Maybe the question of where is home or the question or the definition of home are not really meant to be answered from an earthly perspective.  As Christians, life on this earth is temporary, here today and gone tomorrow. Our lives are but a blink of an eye on the pages of history while we wait for our true home, our heavenly home with Jesus Christ.  We are citizens of heaven eagerly waiting to be united with Christ in our heavenly home.  As the Apostle Paul wrote in Philippians 3:20-21, “But our citizenship is in heaven. And we eagerly await a Savior from there, the Lord Jesus Christ, who, by the power that enables him to bring everything under his control, will transform our lowly bodies so that they will be like his glorious body.”