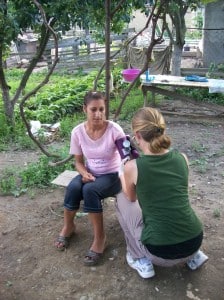 Living as outcasts of society, often in dusty (or muddy) camps on the outskirts of many villages, Roma, with their beautiful dark olive colored skin and black hair, stand in contrast to their fairer skinned neighbors.  More commonly known by the arguably derogatory term, Gypsy, they live an existence of failed integration both across Transcarpathia and throughout many parts of Eastern Europe.  Misunderstood for centuries, even the name Gypsy, is based on the historical ignorance that they originated from Egypt as opposed to their original homeland of India.  Prejudices run deep, even the English expression, “I got gypped” is literally an expression meaning one was taken advantage of by a Gypsy.

Often living by their reputation of being thieves, beggars, lazy and unwilling to work, the Roma often have a difficult time finding work and earning the trust of local people.  It is a catch 22.  People will not hire them based on their reputation, often causing them to live the exact life style that they are stereotyped for, only to justify their “deserved” reputation in people’s minds and the cycle continues.  In reality, Roma, like all people, come from all different cuts of cloth.  Many are honest and hard-working but are never given a chance due the stigma attached to their race.  In contrast, others are quite content to beg, live off failed government programs, and be a nuisance to society.

Many people when they hear the name Gypsy immediately conjure up images of horse drawn wagon trains of a nomadic people, fortune telling, and vividly dressed in bright costume traveling the country side. These days are long gone due to the development of modern borders and nationhood, but the vagabond spirit of the Roma lives on.  There are numerous stories of groups of Roma traveling throughout Ukraine and Russia in the summer to work in potato fields in Russia or panhandle to tourists in Moscow.  We have met older Roma men with wild stories of traveling throughout the vast Russian speaking empire of Soviet Asia and claims of being able to speak seven languages.

Historically known for being gifted with horses, talented copper workers, and having an uncanny ability for business, some segments of the Roma population across Eastern Europe work as very successful business men.  Many though, especially in Transcarpathia, live a very meager existence, dependant on government hand-outs and the generosity of their neighbors.  Almost all are illiterate and while more and more Roma children are attending school, many go to school long enough in the autumn only to collect a government check intended to allow them to buy books and school supplies before quitting school.  The most deplorable of all situations is in a nearby city about 25 miles from Peterfalva, the village where we live, that has an official population of around 27,000 people but has an estimated 5,000-6,000 Roma population living in a Gypsy ghetto.  Naked and dirty children run amongst heaps of trash in and out of mud brick homes filled with putrid air from uncleanliness and wood burning fires.  People bathe in a nearby lake because there is no running water in the camp.  Efforts to supply the camp with water have failed after the water line supplies and spigots were stolen or destroyed and the camp failed to pay the water bills.

Thinking about how to help the Roma usually ends up making one feel quite hopeless and to despair at the enormity of the problem.  In many places The Hungarian Reformed Church in Transcarpathia knows the failure in giving free hand-outs and has tried to take a holistic redemptive approach towards the root of the problem.  While the solution is simple, it deals with something complex: the condition of the human heart.  It is the same deep rooted need within all of us: Redemption that comes from Christ alone. With some success Reformed church congregations of Roma people have been started in a few different locations in Transcarpathia.  Christian kindergartens and outreach have been established as well as summer vacation Bible school camps that reach out to hundreds of Roma youth in the summer.

Last spring Stacey worked through the Luke Society, based out of Sioux Falls, South Dakota, which has a presence here in Transcarpathia. We approached the local director about any possible opportunities where Stacey could use her nursing and medical experience here in Ukraine.  With the language barrier and legal ramifications barring anyone not licensed in Ukraine to practice medicine, it is almost impossible for her to work as a nurse in any capacity here.  The director was quite willing to work with us and spoke with his doctor colleagues and they came up with a program for Stacey to work amongst some of the Roma communities here in our village where we live.

The Roma generally suffer from poor health conditions.  Smoking, alcoholism, poor sanitation, poor diets, over-crowded living conditions among many other factors have led to a poor standard of health and a low life expectancy.  A doctor at the Luke Society clinic developed a social and health questionnaire to research health conditions in the Roma camps in our local area.  They also supplied us with gloves, a blood glucose monitor, a blood pressure cuff and stethoscope.  The doctors, with the blessing of the Luke Society head office in the States, asked Stacey to conduct a questionnaire, test for diabetes, record blood pressure and pulse, conduct simple health screenings and assessments, collect the data and report back to them with the results.  A local university student, who is known in the Roma community because of her work in a Roma kindergarten, assisted us with this program.  She acted both as our translator and liaison to the community.  Sometimes up to 10-15 people were living in a one or two room house.  It would take us several hours to complete the survey in one home.  We encountered cases of diabetes, hernias, worms in children, etc.  However, lung and heart issues appeared to be the most common of health problems:  high blood pressure, asthma, chronic bronchitis, COPD, heart attacks, etc.

Poor diets, lack of proper nutrition, poor sanitation, excessive smoking, and alcohol dependency are all contributing factors.  It was a very fascinating project and a unique opportunity to see through a small window the life of Eastern European Roma.  We were amazed at how welcoming the people were, how friendly and honest they are about their lives and difficulties.  Many of the families were very large with almost and sometimes literally an uncountable number of children.  It was sad to look into the beautiful eyes of these children, see their smiles, and be able to do so little about their long term issues. It was also challenging for us to not develop our own stereotypes and prejudice as we can often find ourselves lacking patience and empathy as we daily encounter beggars and people asking for money.  While the Roma situation seems to be an impossible situation to fix, it is important for us to remember that nothing is impossible for God and even this is not out of the grasp of God’s grace and redemptive plan.

We were excited to hear upon our return to Transcarpathia this past January that one of the doctors used some of Stacey’s research data in a conference sponsored by the Hungarian government on minority problems in Transcarpathia. We are hoping to continue, God willing, this spring with some classes for pregnant women, young mothers, and hygiene clinics.