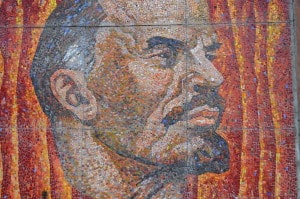 Back in Ukraine, it feels good to be in Eastern Europe.  The same passion, fascination, and intrigue which years ago drew me to this part of the world, still stirs in me a fluttering of excitement that not even a cold day in February can drive away.  This coming spring will mark the 15th anniversary of my first visit to Eastern Europe.  A lot has changed for me and for Eastern Europe, especially for Ukraine, since then.  The biggest change for me personally is that now when I come to Ukraine I am able to work and serve God alongside my wife and share the experience of living in this part of the world with her.  In the year of my first visit to Ukraine, Eastern Europe was a mere decade removed from the fall of the Berlin Wall and Ukraine only eight years past the collapse of the Soviet Union.  It showed.  The grime of a Communist legacy was everywhere in Ukraine.  Chaos, disorganization, uncertainty, corruption, an economy shattered, low wages, mass exodus of young people, lack of hope and opportunity, a failing infrastructure all plagued Ukraine in those days.  Unfortunately, more acutely than ever due to the war in eastern Ukraine, these same issues persist or are being revisited today.  In May of 2000 the “winds of change” were physically apparent.  One vivid memory I have is of visiting a collective farm.  Once part of the forced and blood stained collectivization of Ukrainian agriculture, this collective farm was being used for little more than storage.  In a back corner of the collective farm behind a padlocked fence was the town’s Lenin statue.   This Lenin statue, like thousands of others placed in the center of every town and city of any size across the Soviet Union, once stood on an pedestal, like an idol, an immortal god to be honored and worshiped by all who walked by. On this warm sunny late May morning 8 ½ years after the collapse of the Soviet Union, Lenin the founding father of communism, was collecting dust behind a padlocked fence, nothing more than a perch for birds.  The irony was extreme. Many Biblical truths of the proud and godless being brought low were shown perfectly clear and entrenched in my memory.  The Lenin’s of Transcarpathia are to my knowledge all gone now, the last two being taken down in October of 2005.  A mural of Lenin painted onto a local train station has long since been painted over with a new coat of paint.  Strangely the last evidence of Lenin is a mosaic portrait of him, in our home village of Peterfalva, outside of the former collective farm office.  In Russia and other parts of Ukraine especially Eastern Ukraine Lenin statues still stand.  This Lenin statue, pictured below in a photograph I took in 2009 during much calmer times, in the center of Kyiv was famously and symbolically taken down  and then destroyed with sledge hammers in December of 2013.  At the bottom of this blog is a video of Lenin coming down. 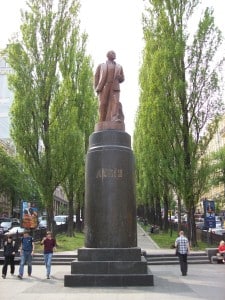 Many things have changed for the better since the fall of communism.  There is freedom of religion.  Churches are allowed to be operational.  Christian schools like the ones we work at are legal and have been opened.  Freedoms and business opportunities exist.  Borders are open and people can freely travel and even emigrate.  The collective system collapsed and agriculture was privatized since the 1991 dismemberment of the USSR. People can own land and property.  Good things have happened.  Many things have also changed for the worse.  Internet and network television stations have brought filth, temptation and perversion that did not exist in such openness just a few years ago.   Open borders and free trade have increased drug use even in the small villages around us.  Today you have to be 26 or 27 years old to be able to remember the communist era.  Our students now have grown up in the digital age of the internet and have lived in relative ease and comfort and have not experienced the difficult life and lack of freedoms their parents and grandparents went through. While we have many great students, in general the hard work, learning, dedication, commitment, and politeness, does not exist in the students like it did even 5-10 years ago.

While the watchful eye of Lenin no longer looms over the center of every village, his communist legacy and the mentality of the system still lives on.  It will take generations for this to wane. This combined with the rapidly changing society into a modern western influenced community has left a strange and dangerous mindset.  The war which has brought financial ruin to the economy, mass exodus of people, broken families, death and hardships, has only made things more complicated.  We hope and pray that God can use us, and we can humbly serve Him to minister and witness to a community of young people who are in desperate need of God in their lives as they navigate into adulthood and form a new generation of leadership during these tumultuous times.