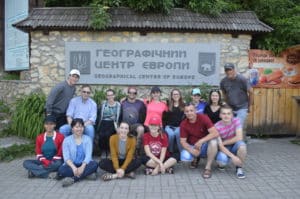 Corn dominates the landscape of much of Iowa.  This is undeniable.  I have heard many people complain about a drive across Iowa, grumbling about the miles of nothingness but corn and soybean fields, discontent and bored for each of the 306 miles it takes to drive across Iowa on Interstate 80. Lacking oceans and mountains many people view traveling through Iowa as an unfortunate necessity to endure as they pass by on their way to somewhere they think worthier of their time.  I have never understood this. I love the state of Iowa and its surreal beauty of rolling green hills and big skies.  I look forward each and every time to any opportunity to visit Iowa. I have many times in my life championed Iowa to fellow travelers as a place of great beauty and charm filled with interesting Midwestern small towns. Iowa is an agriculture paradise dotted with historical family farms and century old picturesque barns. In some ways, Iowa reminds me also of Ukraine.  Rising and falling hills of crops dominate the skyline of Ukraine much like they do Iowa. Located in Northwestern Iowa in the small hamlet of Sioux Center is my Alma mater, Dordt College, a small Christian College of Reformed heritage named after the Cannons of Dort, a statement of Faith signed many years ago in the Dutch city of Dordrecht.

I was excited this past May to get a visit in Ukraine from two professors from Dordt College who were leading a group of students on a research project in Ukraine.  Professor Mark McCarthy and Professor Mark Christians took a group of students to study life, culture and social issues of Ukraine.  The research project was based on interviews done by a separate research group years ago.  The group was made up of three Dordt students plus eight other students from different universities from across the country. I was asked if I could help them organize a trip to Ukraine to see both the country and its people.  I enjoyed working them and getting to know the students taking part in this research program.  It was a pleasure to show them around western Ukraine and for us to have interaction with these students.