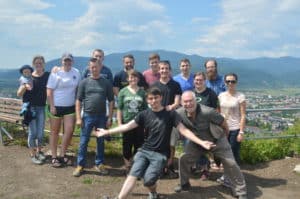 Going to summer camp is something much different in the mind of an Eastern European youth than it is to their North American counterpart.  If the average North American’s youthful years were anything like mine, then summer camp was something special and unique.  Summer camp was a getaway, a vacation, a week away from home full of adventure.  Summer camp days were filled with swimming, outdoor games and programs, singing around the campfire, camp counselors, and sleeping in cabins or tents.  Camp was an expensive luxury that did not come every year and something so unique that I only did it twice in my entire youthful existence.  Hardly did I think that I was underprivileged or that I was being deprived of something that all my friends were doing, or that my parents were unfair.  These thoughts never crossed my mind.  It even seems my two summer camp experiences were a tick above average when compared with childhoods of friends and family.  Sometime around my 10th year of life I spent a week at a camp outside of Grand Rapids, MI.  This was followed some years later during middle school by a trip to the northern Michigan woods with our church’s Cadet Club to join thousands of other Cadets from around North America in the Cadet Camporee.  Cadets was a Calvinist version of Boy Scouts and every few years cadet clubs from Christian Reformed Churches from around North America would meet for a massive camp.  These two staggered and thrilling events left me with fond memories, but these few short days fitting into less than two weeks completed my life experience of summer camps until I went to Ukraine.  Despite being the same words, summer camp, means something drastically different to the average school aged child or teenager in Eastern Europe who is likely in any given summer to attend multiple summer camps.  Summer camps are inexpensive and educational, sometimes even mandatory extracurricular summer learning required by a school.  The rare student might attend a camp that their North American contemporaries would call summer camp.  But not many.  Some high school students and youth groups go to church denomination camps where they meet with hundreds of other youths in a sort of convention/camp.  The vast majority of summer camps are language, faith and Bible, art, music, and folk-dance camps put on in local communities by area individuals, churches, or schools. To be fair, the typical Bible or faith camp resembles what I would have grown up calling Vacation Bible School.  However, Bible or faith camps tend to be a much larger production and often involve participants spending the entire day and even sleeping on site and spending the entire week at the faith or Bible camp. Our summer camps fall into two of the summer camp categories.  Language and faith.  Our camps are English/Outreach camps where students learn English and also hear the Gospel.  Our camps also fall into two different styles.  Some camps are required extracurricular summer learning within a school for the students of the school.  Other camps are partnered with churches as an outreach for the people of the local community which the church serves.  This summer we enjoyed organizing and conducting six summer camps in three different countries.  We praise God for this opportunity and we thank God for these weeks spending time with hundreds of young people teaching English to them, but more importantly having a chance to share our faith and the Gospel of Jesus Christ with many young people.  We were once again blessed with a wonderful team of volunteers from both the U.S. and Canada who came and lived out and shared their faith through both word and deed, teaching English, leading devotions and singing, organizing games and activities, and many other things.  A big thanks to David Guba, Nathaniel de Vries, Sarah Slager, David Lammers, Sandhya Poelman, Anya Boekestein, Willianne Voogd, Nathan Bloechl, Jerry Janney, Ben McFarland, Carrie Rice, Isaac Boerema, Csilla Kodobocz, Alexandra Krizsan, Ferenc Suto, Boglarka and Elemer Olah; all who traveled many miles and spent many weeks with us this past summer.  Also, we would like to express our gratitude and thanks to the teachers, university students, translators, pastors, cooks, and many other helpers and individuals who gave so much of themselves in making these camps happen.

One of greatest and most rewarding parts of our ministry is to see former students and Bible study attendees finish their studies and become a new generation of leaders in the workforce of their communities, schools and churches.  We praise God for invitations and increased opportunities to work with more schools and churches as we see old students from years gone by who have attended our camps, Bible studies, and English classes who finish university and seminary and who now have churches, or classrooms of their own.  What a testimony to God’s faithfulness to see students grow up and continue to walk with the Lord in faith.  How wonderful it is to serve the Lord and partner alongside these young adults in the churches and schools they now have been called to serve in.  Increasingly, we are getting invitations to begin outreach camps alongside former students who were once camp attendees themselves.