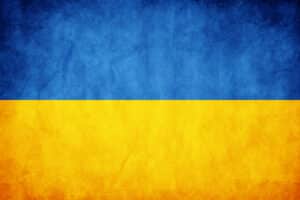 We are thankful to so many of you who have been praying for us and the situation in Ukraine. We are grateful for the concern that so many of you have had in reaching out to us and checking on our wellbeing. We continue to covet your prayers for us, but even more so we covet your prayers for the people of Ukraine during this time.  Despite all the media attention in recent weeks, this past Thursday seems to have caught many people by surprise. I am one of them.  Political talk, rhetoric, threats, and even troop buildup have all happened in the past. Many people we have talked to in Transcarpathia, Ukraine, our home for many years, seemed very unconcerned and even marveled at all the international media attention the story was getting. I believed this would again be just talk and rhetoric or at worst that the Russians would limit any military action to the Donetsk and Luhansk regions of eastern Ukraine, that have been already at war for years.  I was wrong and I was surprised at the massive invasion and assault the Russians have made on Ukraine. It has been unbelievable seeing footage and pictures from the intense fighting across Ukraine and especially in the siege of Kyiv, a city that we have so many wonderful memories in. The wide spread fighting in nearly every corner of Ukraine has been shocking. Transcarpathia has been one of the few places in the country that has not seen violence. However, even in the far western part of Ukraine missile strikes occurred, the closest ones to us being a distance of 150 miles away.

We awoke Thursday morning February 24 to the news of the invasion which began at 5am that morning.  The Peterfalva Reformed High School where we have worked for years, started school that day as usual, but as more news reports came, the Ukrainian government ordered all schools across the country to close. The school abruptly ended during the second hour of the day and all students were told the country was at war, that they all needed to leave and go home.  With heavy hearts, we spent half a day debating what to do.  We wanted very much to stay in Ukraine, hoping the early reports were false alarms or exaggerated.  After consultation with the local pastor and other trusted friends we were advised it was best to leave, especially with three young children.  They suggested if peace was restored quickly then we could come back next week. If the situation deteriorated, we may not be able to leave the country and they strongly suggested we take the opportunity to leave while we could. There were rumors the border would close at midnight that evening.

Thousands of people were fleeing Ukraine and the borders were and are packed. We heard all the Hungarian/Ukrainian borders were very full so we made the decision to enter into Romania.  The Romania border also was very full of cars, but we were by God’s grace able to make it into Romania in only three hours. We also had to then cross into Hungary from Romania.  The Hungarian/Romanian border was also full of fleeing Ukrainians. There were four lanes of traffic all about a half mile long.  We were thankful the lines moved quickly at each border crossing as concerned border guards quickly checked documents, stamped passports and let people through.  We have been given accommodation at the Tiszaujvaros Reformed Church. This is the same church which gave us refuge in 2020 during the early months of the Covid pandemic.

Our hearts ache and we have great concern for our dear friends and the Christian community in Ukraine who are unable to leave.  So many can’t just pick up and leave their farms and homes and flee.  We have many wonderful friends who are staying and hoping for the best and praying that violence will not reach Transcarpathia and praying for peace for the country. It is considered unlikely that violence will envelope Transcarpathia, but there is so much uncertainty, anxiety, and fear. When we left Ukraine, we entered Romania and followed a road that paralleled the Ukraine border. This road offers incredible views of the Carpathian Mountains of Ukraine. The sun was setting and the beauty of God’s creation and the beauty of Ukraine was evident. It was hard to imagine at that quiet moment that such violence, atrocities, and evil unleashed by Putin were taking place in Ukraine.  We also thought about so many dear friends that were staying behind in Ukraine, either by choice or because they had nowhere else to go. We wondered when we would meet again and what the country and conditions would be like when we would again enjoy the fellowship of our brothers and sisters in Christ in Ukraine. We felt very emotional and our hearts were heavy with grief.

There are thousands of refugees coming out of Ukraine. While Transcarpathia has not been a focal point of violence, it is a center for the flood of refugees trying to leave Ukraine as Transcarpathia shares borders with Hungary, Poland, Romania, and Slovakia.  Hungary announced they are anticipating 600,000 refugees alone. Not only is Transcarpathia an exit point for refugees, it is also the destination point for thousands of other refugees who can not or choose not to leave Ukraine. Many continue to hope the violence will not reach this far western corner of the country. The Peterfalva Reformed boarding school, where we have worked for years, as well as many other schools across Transcarpathia are hosting, lodging, and feeding refugees as they come west out of the war torn eastern and central parts of Ukraine. Hungary and its citizens and churches have mobilized and are diligently supporting refugees streaming into the country with food, goods, and lodging.  Many dormitories, church parsonages, and private homes have been offered for lodging. We have heard that there are shortages of food in Ukraine and efforts are being made to deliver food to those back in Ukraine. We are in Hungary since late Thursday night, but have spent the last days helping people on foot travel from the border to places of lodging in Hungary.  We are trying to get involved in getting back into Ukraine in the coming days to bring food and supplies to those in need there.

Please continue to pray for the people here.  People are suffering greatly and the loss of life in Ukraine is likely much greater than being reported. Kyiv is seeing extremely intense combat and we have been in communication with friends in Kyiv who have describe horrifying violence, missile and bomb attacks. Please pray for peace and an end to Putin’s aggression and evil. Please pray for the hundreds of thousands of refugees who have left their homes and are living in great distress. Please pray for the church during this situation, that it will have wisdom, and will faithfully show the love of Jesus Christ, share the Gospel in both word and deed, and show great compassion to so many hurting people.

Please also pray for our family as our plans and lives have abruptly changed.  We are thankful and grateful for the wonderful hospitality we have received in Hungary, but we must see if we can find a more permanent living situation.  Pray that we will have wisdom in looking for ways to best serve people in need and to share the Gospel as our plans have greatly changed.  Our kids have also been feeling the pressure of the times and events without being able to fully understand the magnitude of the situation.  Long border waits, frequent moving, stress and uncertainty of the situation are taking their toll on them, and they could really use routine, structure and familiarity in their lives.

Kyiv is a beautiful and historic city. It breaks our hearts to see the violence engulfing the city during the Russian siege. The suffering of the people living there is great. We have had many wonderful memories there and we look forward to seeing this great city again. More importantly we pray for the people and friends living there, and for people who have fled from Kyiv.  We look to God and pray for Him to restore peace to this city and to this land. The picture below, in Kyiv, during a peaceful time.

Psalm 140 has been on our heart during this time. What comfort the end of the Psalm holds. “I know that the Lord secures justice for the poor and upholds the cause of the needy. Surely the righteous will praise your name and the upright will live before you.”

We thank you again for your prayers and for your support.  Thank you for reaching out to us.  Continue to pray for Ukraine and it’s people, the refugees, and the people trying to help.  May God be glorified in this situation in whatever may come. Eric and Stacey Hoeksema 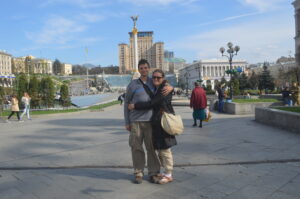