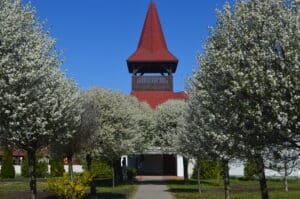 We spent considerable time again this year living in northeastern Hungary in the small city of Tiszaujvaros. Relocating there at the onset of the war in Ukraine. We were again welcomed in a time of need by the Hungarian Reformed Church of Tiszaujvaros.  Their generosity and kindness towards us know no bounds. They graciously gave us accommodations in guest rooms and access to the church kitchen and made sure any need was met. We are indebted to their gracious hospitality and the concern and love they show us. This in fact has been the second time they have taken us in.  We spent six months living here in 2020 after getting stuck in Hungary and away from our home in Ukraine when borders closed when Covid began. This has been a home base for us and a good central point for us to operate from as our work and ministry has changed considerably this past year. 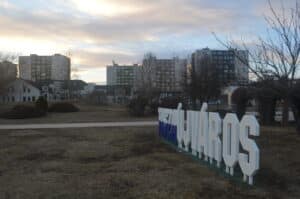 In northeastern Hungary on the west bank of the meandering Tisza River lies the town of Tiszaújváros.  Today, a refreshingly unassuming and modest blue-collar town on the northern edge of the great expanse of the Danube basin. The city’s history is unique.  Astonishingly different from other cities across Hungary because of its relatively short history. It’s establishment dates back only to the late 1950’s, the early days of the Iron Curtain era. Unlike nearly every town and city across Europe, the origins of the town do not begin in medieval times. There are no cobbled stone streets or an old historical center. Tiszaújváros is an infant in historical terms and does not even predate the 20th century. In fact, retired residents of the town have lived longer than the city they call home.

The construction of Tiszaújváros began only on September 9, 1955. Following the communist takeover of Hungary, the government, wanting to add industry and jobs, built the city as a model industrial communist city. Instead of ancient church towers, the skyline of the city has smoke stacks from the factories on the edge of town and countless apartment blocks built to house t 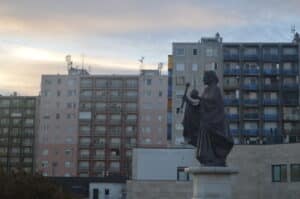 heir workers. The streets of the city are perfect straight lines and squares laid out by modern urban engineers.Originally the name of the city was borrowed from the historical village of Tiszaszederkény, located just outside of the current city limits.  On April 22, 1970, a day which would have been Vladimir Lenin’s 100th birthday, the city was renamed Leninvaros. Translated in English as Lenin City. Only in 1991 following the collapse of the communist regime in late 1989, did the name change again.  Tiszaújváros was the name chose., The city was named after the Tisza River flowing nearby. Tiszaujvaros would be translated into English as New Tisza City. Today the city is a very pleasant and beautiful town with a laid-back feel. The town compensates for the lack historical architecture with plentiful trees, flowers, and green parks.

The earth below is teaming with thermal water making the town a popular hot spring spa destination.  The city of about 18,000 people is also a centralized easy hour drive from the Bukk Mountains (part of the Carpathian Mountain range), Hortobagy National Park, and the UNESCO world heritage wine region of Tokaj.

No churches were built or organized during the first decades of the city’s existence due to the communist era. There was no city prior to the communist era meaning that there is also no historical church building. In the 1990’s a Hungarian Reformed Church was built following the collapse of communism. The church has a more modern layout including an assembly hall, church kitchen, and guest rooms attached to the church sanctuary. 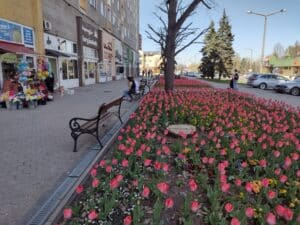 Tiszaújváros is the home of one of our summer outreach camp weeks and many people of this community have become dear brothers and sisters in Christ. The Hungarian Reformed Church of Tiszaújváros has partnered with us since 2015 in organizing summer outreach/English camps. We have always marveled at God’s providence and hand in bringing us to this town and community. It is a story worth repeating as we can share of the goodness of God and what He has done for us.

The 28th of February 2015 was a Saturday. A cold late winter day, with flurries of snow blowing in the wind reminding us spring was still weeks away.  We had been asked by the Peterfalva Reformed High School to drive and chaperone six students from Ukraine to Budapest for a Bible competition between high school students from across the Hungarian speaking lands. Leaving Budapest that afternoon, following the completion of the competition, a water line broke in our yellow 1989 Volkswagen transporter van.  In classic VW vans, the engine is located in the back under the trunk area.  After unloading the student’s luggage, I found the broken waterline.  The water-cooling system and broken waterlines had been a consistent defective problem in this particular VW van.  After fixing the waterline we began again on our journey back to Ukraine.

Two hours and 170 kilometers later, I was alarmed to see the temperature needle on the dashboard rising again, indicating the engine was over-heating. Having no shoulder on my right, and the fast-moving cars of the Hungarian autobahn on our left, we had to keep driving a kilometer until the nearest exit to safely pull over. A waterline had broken again, evidently caused by a pressure problem in the cooling system.  With the engine overheating and realizing there was a greater problem causing overpressure in the system, we could not travel on.

We called a friend who looked in the Hungarian Reformed Church directory for the closest Reformed Church, it was in Tiszaujvaros. He called the pastor of the church who graciously came to our aid, towing us back to the church.  We were shown guest rooms that we could use for the night, groceries were then brought to us for a late supper and breakfast the next morning.  After worshiping with them the next morning, we barrowed a van of a friend from the Budapest and traveled back to Ukraine. One week later I returned to Tiszaújváros to get our van after repairs had been made at a local mechanic. The Tiszaújváros church had a been searching for a way to start an English-Gospel outreach camp and asked if we would consider helping them organize a summer camp. We have since returned every summer and have so very much enjoyed this opportunity to partner in Gospel outreach with friends and brothers and sisters in Christ at the Tiszaújváros Hungarian Reformed Church. 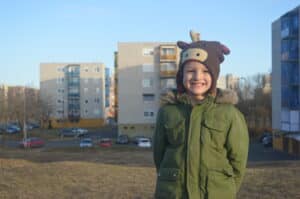