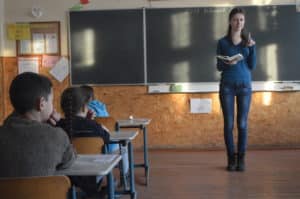 On the outskirts of most towns and cities live the Roma.  Roma are not Hungarian or Ukrainian, but rather originally natives of India who immigrated in the middle ages to Europe.  Living in impoverished camps and mud brick homes, the vast majority of Roma have never or rarely been to school and are illiterate.  The local church has begun a number of kindergartens and afternoon school learning centers for Roma children in an attempt to bring the gospel to these people, as well as to educate them by teaching them to read and write.  Typical kindergarten activities and games are also conducted and it is also an opportunity for the children to eat a hot lunch.  We partner with one of these kindergartens every Tuesday afternoon through winter and spring months by bringing high school students from the Peterfalva Reformed High School to organize an afternoon program of a Bible story and lesson, singing and prayer, crafts, writing exercises, and games.  We believe that this a great opportunity for students from the high school to show the love of Christ to a less fortunate people of their own communities.  We hope and pray that it will also aid in removing the racial barrier that divides and separates the Roma from their Ukrainian and Hungarian neighbors.  It is a valuable opportunity for the young Roma children to learn about God and the Bible as well as to practice and learn necessary life skills such as reading and writing and table manners. 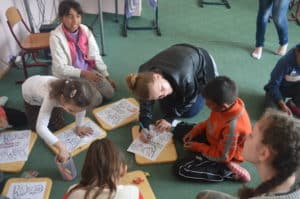 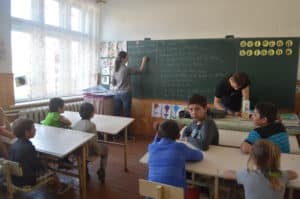 Involvement in the Roma community came in different ways this past year.  A local pastor by the name of Elemer helps to run the local Roma kindergarten.  He regularly drives up and down the streets of the village picking up children in the camp and taking them to the kindergarten.  Many of these children probably would not attend if it was not for the ride he offered to take them.  Driving from one camp to another he must also pass by the local state school.  Allowing him to take older children to school as he passes by to collect younger children for the kindergarten.  Many of the older children like their younger siblings would not attend if not for someone making an effort to go and get them.  Pastor Elemer’s van broke down for a couple of week stretch this past spring.  He asked me to cover for him with our old yellow Volkswagen van. 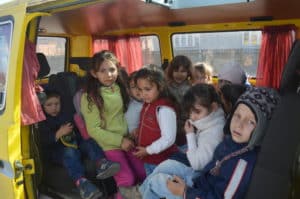 It was an interesting and eye opening experience for me to see his involvement in the Roma community and to transport van loads of children back and forth to school and kindergarten.

One late spring night Elemer organized a special outreach evening with a guest speaker in the Roma congregation.  Over one hundred people came and packed the small building.  Lasting long into the night, upon nights end I was asked to transport mothers, infant babies and small children back to the camp to save them a two mile walk in the dark. Once again I felt blessed that God has opened these small windows into the life of the Roma. 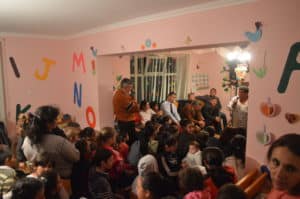