What is the root cause of all this conflict in Ukraine?  It is a good question that is difficult to answer and difficult to understand.  I don’t know if anyone has the answer.  Is it a throwback to the geopolitical Cold War rivalry between East and West?  Is it struggle of world powers staking claim over their spheres of influence?  Is it all about money and business? Both the West and Russia want to do business with Ukraine. The Donbass (meaning the Don Basin and the name given to the territory being fought over in eastern Ukraine) is the industry, mining, and natural resource center of Ukraine.  Is this conflict about military power? The Crimea is home to a major Russian naval base and home to the Russian Black Sea fleet. I would like to suggest that the possible root cause to all this rests in the same cause that nearly all our sin lies in.  Namely pride, along with the pursuit of power, selfishness and self-interest.  The fall of the Soviet Union and the Russian decent from the world power it once was, was no doubt a humiliating blow.  Seeing Ukraine move towards the West and out of the realm of Russian influence may have been too much for Russian pride and interests to bear.  Putin also desires to build a Eurasian Union to rival the European Union.  Ukraine, with its size and natural resources, would obviously be a big player in any potential Eurasian Union organized by Putin. I would imagine Putin despises the thought of Ukraine moving toward Western alliances. I think that Western leaders and the media fail to understand what exactly Ukraine means to Russia.  Putin and many Russians see Ukraine as an illegitimate country.  They see Ukrainians as Russian or Slavic brothers who rebelled and separated from the Motherland. Lenin once said, “For Us to lose the Ukraine would be to lose our head.”  The Ukraine/Russia relationship can strangely be compared to the U.S./Canadian relationship.  Maybe my Canadian relatives and friends will disagree, but in my opinion there are interesting comparisons in the two relationships.  Ukraine/Russia and the U.S./Canada share: 1. Common traditions, food, customs, holidays, heritage, and Religious backgrounds.  2.  Common or a related language (Russian is widely spoken across Ukraine, a mother tongue for many, and Ukrainian is a closely related Slavic language). 3.  A long and open border: until recently Russians and Ukrainians did not even need passports to cross their shared border. 4. Shared history. 5. Shared ethnic identity in the Kievian Rus for the Russians and Ukrainians, British and immigrant communities for Canada and the U.S. I think Ukrainians and Russians are separate people and have a separate identity, but I don’t believe it can be denied they share a great deal in common.  The protests in Kyiv began with Ukraine under Russian pressure pulling out of an agreement with the West; this also signaled a status quo to the corrupt, cronyism, kleptocratic way of life that plagues Ukraine and rest of the former Soviet Republics. Freedom, opportunity, and dignity once again were lost. I am in no way excusing or justifying Putin and Russian action.  I think Putin is a corrupt, power hungry dictator who should stay out of Ukraine; I think this war and conflict begins and ends with him. But it is possible I think to understand what is at the heart of this.  Putin saw the West making economic deals with Ukraine, he saw the West begin to discuss NATO membership for Ukraine, and he saw this not as just encroachment and an invasion of his sphere of influence, but I think he sees Ukraine as “his own” and this as an intrusion of influence on his territorial spheres of power.  For Putin, I believe this was salt being thrown into the wound of the embarrassment of the collapse of the Soviet Union and Russian prestige. I don’t think Russia believes in the legitimacy of an independent Ukraine and the very idea of an independent Ukraine signing economic deals and joining NATO is preposterous to Putin. Putin has a very quixotic view of a Russian Ukrainian relationship. Western powers offering economic and military relationships to Ukraine may have been the straw that broke the camel’s back.  I am in no way supporting Putin or Russia in this matter.  I am strongly in support of an independent Ukraine and I believe Ukraine has every right to move in a Western direction and I believe Ukrainians have every right to desire a better life and desire opportunities denied to them by the corrupt post-Soviet society that lingers like a bad odor.  But I think it is helpful to understand what is happening in Ukraine if we take the time to consider what a U.S. response would be to Russia meddling in Canadian affairs and offering economic and military alliances to Canada.  While in no way excusing Russian aggression, a case could be made that western powers, who badly underestimated the Russian position and its intentions, could have been more sensitive and discerning while negotiating an invitation for Ukraine to join the Western sphere of influence. The biggest tragedy of all, regardless of the root cause, as in most wars it is the common everyday people, just trying to live their lives, who are caught in the middle and suffering during this international political power struggle. 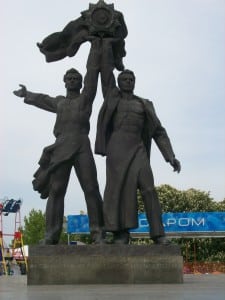 Pictured above is the People’s Friendship arch and monument between Ukraine and Russia. Built in Kyiv in 1982.

I think Putin has also been empowered by the inaction and weakness of the West.  Putin has clearly seen he can do with Ukraine what he wants and the West is not going to stand up to him.  Putin has walked all over Western leaders.  With the possible exception of German Chancellor Angela Merkel, who speaks fluent Russian, Putin seems to have his way with other world leaders.  It has been disappointing to watch the West invite Ukraine with open arms into economic agreements, desiring trade and business with the Ukrainian market and talking about NATO membership for Ukraine, then as soon as Russia reacts, the Western powers have abandoned Ukraine leaving it to fend for itself, even denying much needed supplies to Ukraine. If Russia next turns on the Baltic States, (Lithuania, Latvia, Estonia) who like Ukraine are also former Soviet Republics, but unlike Ukraine, are members of NATO. Western leaders will have to militarily confront Russia or NATO will be meaningless. This is not a board game of Risk; Western leading should have been more astute to real world implications, while considering new NATO members.

Below is one of the most interesting articles I have read on the situation in Ukraine and Russia.