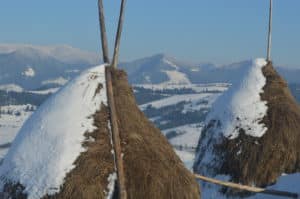 It has been an unusually mild winter in Transcarpathia.  Snow has been scarce. Nonexistent really, nothing but the occasional dusting of snow.  Even as you gaze east on a clear day towards the Carpathians Mountains, the foothills have sparse amounts of snow.  Only the higher peaks, the most distant the eye can see have copious amounts of snow. The weather has seemed to be more March like than you would expect to find in the month of January.  Legendary tales of the winter of 2018 will not be told around dinner tables in the coming decades.  The Snowdrop flower, the earliest flower of the season which typically springs up from the ground at the first melting of the snow, has appeared even before February made its entrance.

We enjoy the cozy and quieter winter months.  I am thankful we have been able to have two different opportunities to go to the Carpathians Mountains and experience some genuine winter days.  The first opportunity came with our trip to the mountains during the Pella Winterim trip.  We traveled there with a combination of Pella Christian and Peterfalva Reformed High School students.  Thick and heavy snow flakes began to fall as we drove into the mountains.  The next morning, we awoke to a fresh pristine blanket of snow.  Our second opportunity to visit the mountains this winter was on the annual sledding day the Peterfalva Reformed High School organizes every January.  It was a beautiful day; the sun was shinning brightly as the students went up and down the sledding hill. 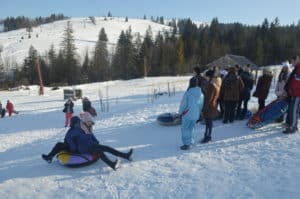 It was a great opportunity to spend time with teachers and students alike with the gorgeous wintry backdrop of the Carpathian Mountains all around us.  Standing on top of a mountain with snowy peaks as far as the eye can see has a way of making a person stop and gaze in awe, marveling at God’s creation and softly pondering His handy work and His majesty.  In the quiet and pristine beauty of the mountains to be reminded anew that without a doubt creation speaks of the existence of God as Paul writes about in Romans.